Deadpool may be the comic book movie spoof to end all comic book movie spoofs. It playfully and cleverly deflates the conventions and cliches of superhero flicks — as well as its own damn self — with the snarky, sadistic glee of a stoned fanboy who’s binge-watched too many Chuck Jones-era Looney Tunes. No cow is too sacred here, and no ego is left un-punctured. (Even Stan Lee’s perfunctory cameo appearances get punked.)

In his print incarnation, Deadpool is one of the few characters aware of the fact that he exists in a comic book, leading to plenty of meta humor and constant breaking of the fourth wall. This carries over into the movie as well, with a degree of self-awareness rarely found in a movie. The antics loop back on themselves constantly, riffing on everything from Reynolds’ “Sexiest Man Alive” status and his ill-conceived appearance as Deadpool in X-Men Origins: Wovlerine (2009) and even more ill-conceived appearance in Green Lantern (2012).

At its core, Deadpool is a surprisingly conventional comic book flick that would be forgettable if not for its entirely unconventional tone and structure. The first half or so is told via flashbacks woven through an extended sequence on an overpass (glimpsed in most of the promo material and the leaked proof-of-concept footage that launched the production). We get a pretty standard “mercenary meets girl (Morena Baccarin), mercenary falls for girl, mercenary gets cancer, mercenary agrees to a sketchy lab experiment that activates his latent mutant badassery but leaves him hideously disfigured, mercenary goes on revenge kick while fretting over how to keep girl” action rom-com.

Fortunately, that’s not what the movie is about. The goal of Reynolds, first-time director Tim Miller, and screenwriters Paul Wernick and Rhett Reese (Zombieland) is to turn the genre on its head and then kick it in the balls until it begs for mercy. The jokes are fast, furious, and almost non-stop starting with the opening credits sequence and running through the obligatory post-credits tag scene. 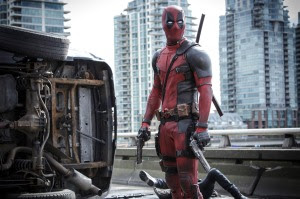 Deadpool relies heavily on its twisted humor, so much that there is a noticeable lull when the middle act slows and goes a little dark. It can’t quite avoid all the cliches of the genre and stops short of fully subverting it, falling into a love story straight out of, well Love Story (but with more kink) and climaxing with your standard action blow-out.

This is possibly the role Ryan Reynolds was born to play. His comedic timing is unfettered, and he’s game enough to play the role with his face hidden under a mask most of the time, and covered in gruesome prosthetics much of the time that it isn’t.

Deadpool is such an over-the-top character that he overshadows the rest of the players. The ersatz villain, Ajax (Ed Skrein), is played surprisingly by-the-book, though his super-powered henchwoman, Angel Dust (Gina Carano), manages to impress more with less screen time. Deadpool takes place in the same movie universe as the X-Men franchise, giving it ample opportunity to zing the hell out of those movies. Painfully earnest Russian hero Colossus (played via motion capture by Andre Tricoteux and voiced by Stefan Kapičić) makes for an unusual straight man, and his gothy teen sidekick Negasonic Teenage Warhead (Brianna Hildebrand) is a surprising match for the Merc’ With a Mouth. Silicone Valley’s T.J. Miller meshes well with Reynolds’ style of comedy as Deadpool’s bartending confidante, Weasel; and Leslie Uggams (no, really) also spices things up as Wade’s aged, equally foul-mouthed roommate, Blind Al.

The budget is low, but that too is made into joke fodder. This was an obvious passion project for everyone involved, and their enthusiasm powers the movie along, budget be damned. Their biggest gag might just be in the timing: The next couple of months will bring us Batman v. Superman: Dawn of Justice, Captain America: Civil War, and X-Men: Apocalypse. In a year of comic book movies with titles full of colons and stories driven by superheroes battling each other, Deadpool’s anarchic middle finger to his bloated, self-important comrades-in-spandex might just take some of the wind out of their sails.